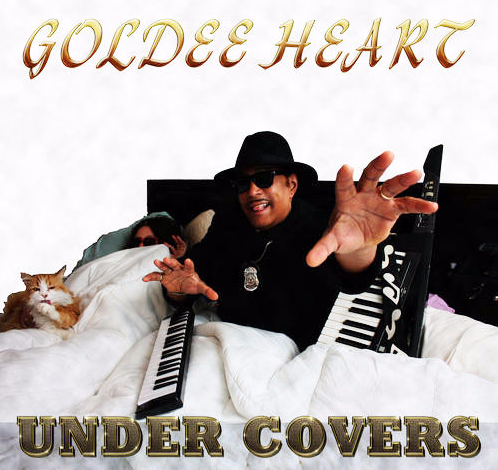 Goldee Heart is Working
'Under Covers'

RICHMOND, VIRGINIA (01 AUGUST) Normally, It's not easy working 'Under Covers.' After all, covering classic songs is usually a risk for any artist. However, for 2007 American Idol Underground winner and VA R&B Award recipient Goldee Heart, the task seems as though it is second nature. In his latest release, Goldee Heart is truly working Under Covers. The project's main focus is on covering the classics, however, Heart also offers a new addictive original in the album's title track.

The nine true classic songs covered in Under Covers feature works from such renowned artists as Stevie Wonder, Chaka Khan, Teena Marie, The Isley Brothers and others. The album displays Heart's uncanny ability to mix Contemporary R&B, Pop and AC genres, all with a touch of Funk and hints of Mo-Town. In this project I set out to creatively conquer some of the most influential songs and artists in the world explains Goldee. The variety of genres and artists Heart covers also reflect his own inherent musical diversity, something he's developed over decades as a performing artist and songwriter.

Key tracks on the album include the title track Under Covers, which is the only original track on the album. Penned, produced and mastered by Goldee, this funk-laden dance tune is a collision of retro and modern instrumentation all wrapped into an extremely radio-friendly tune. Other notable tracks include a cover of The Isley Brothers ballad The Highways of My Life, and a smooth jazzy expose of Michael Franks'Lady Wants to Know. Goldee also offers a rendition of Heatwave's hit Mind Blowing Decisions - off of their platinum 1978 album, Central Heating.

Goldee Heart produced mixed and engineered Under Covers with the help of the talented Jacqueline McCollum on vocals in Seeing You. In addition, Heart features the work of Fusion/Funk keyboard legend George Duke in Yester Year and Seeing You. While working Under Covers, Goldee Heart has revealed these once again to those that already know them - and for the first time - to a new generation that has yet to discover them. Goldee sums it up best by saying, Sometimes you find yourself with nothing but a song, and if I had a soundtrack, these songs would be there!"